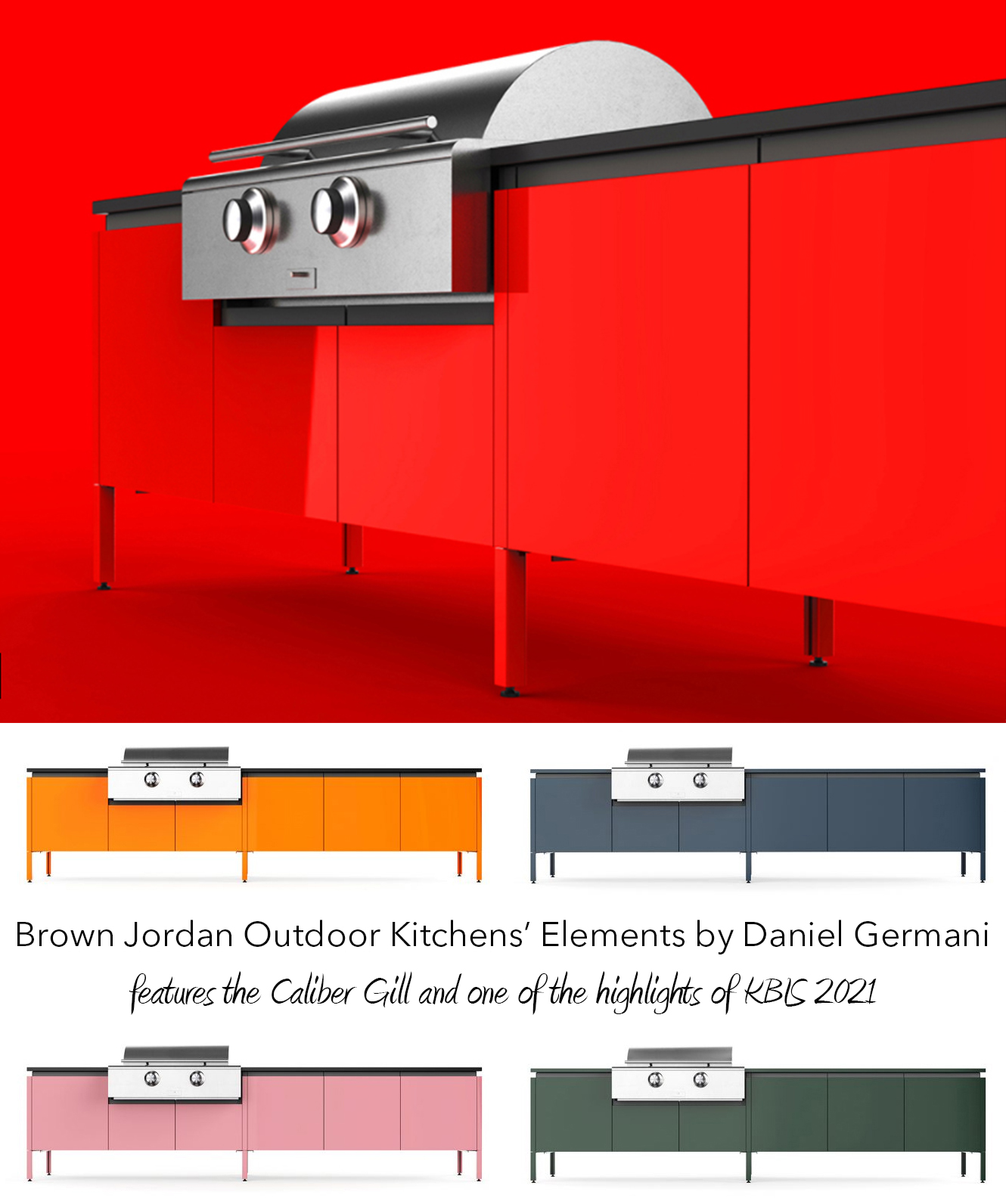 Caliber’s featured dealer, Brown Jordan, received quite the buzz during the Kitchen and Bath Industry Show (KBIS) for it’s Outdoor Kitchens’ Elements by designer/architect, Daniel Germani. Within this design they include and highlight the Rockwell by Caliber Social Grill. See why this new design is receiving such accolades. Design Milk is drawn to the “13 Bold Colors That Will Take Your Dream Outdoor Kitchen up a Level” and click here for the full story. In Kitchen and Bath Business (KBB), see why editor Chelsea Butler also choose this design as one of her top picks during KBIS in this article.

Metropolis Magazine loves how designers and manufacturers are collaborating to create bright ideas. “In a new line for Brown Jordan Outdoor Kitchens, designer Daniel Germani discards cookout clichés in favor of candy-bright finishes and a furniture-like frame. (For traditionalists, a stainless-steel option without the powder-coat finish is also available.) The modular units offer integrated handles, drawers, and pass-through cabinets.”

To see why this design caught Interior Design’s eye at KBIS and was one of their Best of Year 2020 designs, click here. 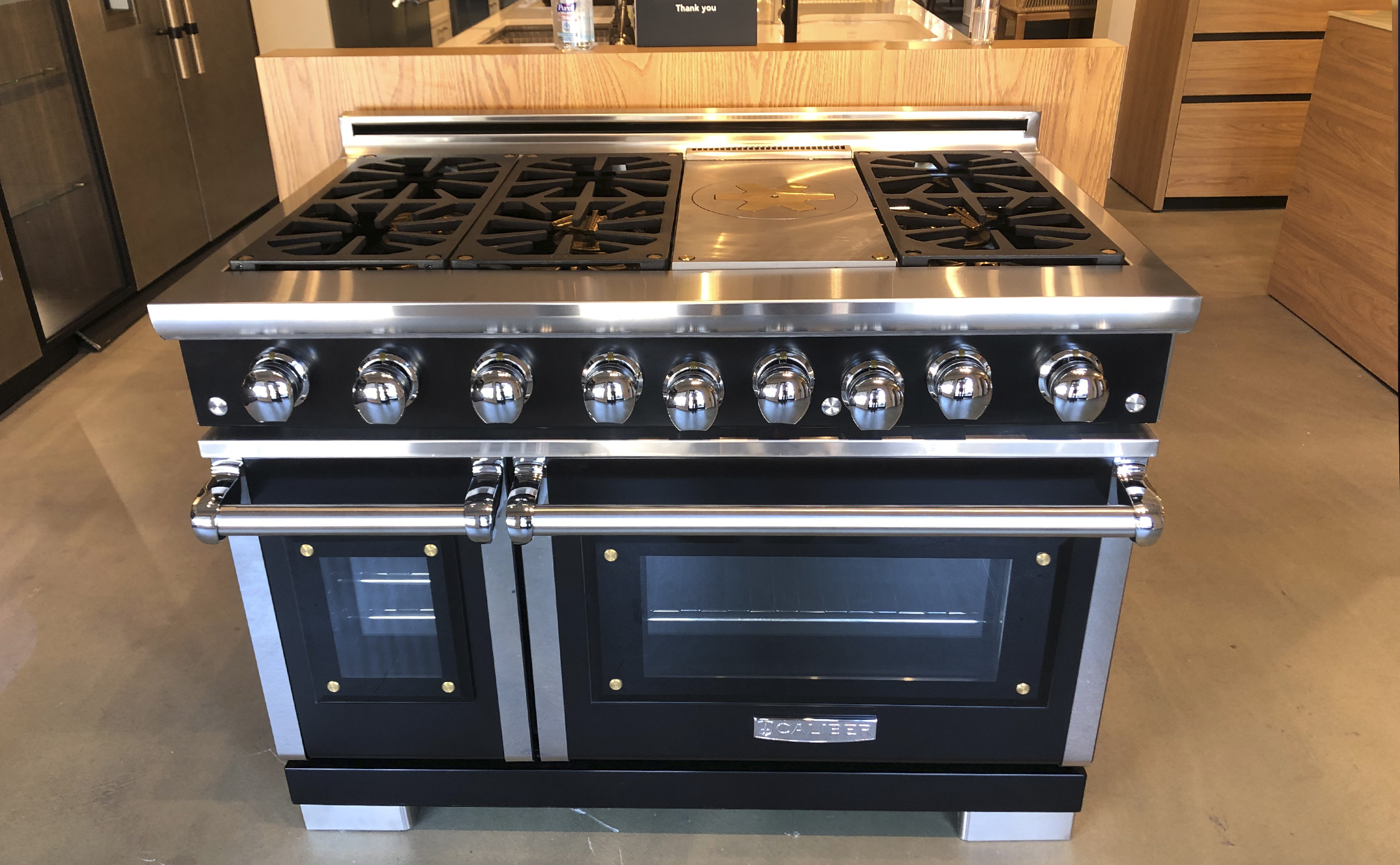 With the opening of Pirch’s new showroom in Solana Beach, California you can see the eye catching 48″ Caliber Indoor Professional Range with six burners and a French Top in a custom black color. Pirch has been a longtime dealer of Caliber products and their store design associates can help you find the right Caliber products for your indoor or outdoor kitchen in Southern California (with locations in LA, Palm Springs, San Diego and Orange County).

And, if you are designing your outdoor kitchen visit Pirch San Diego to see the Rockwell by Caliber Social Grill and Caliber Pro Kamado Charcoal Grill and Smokers on display. 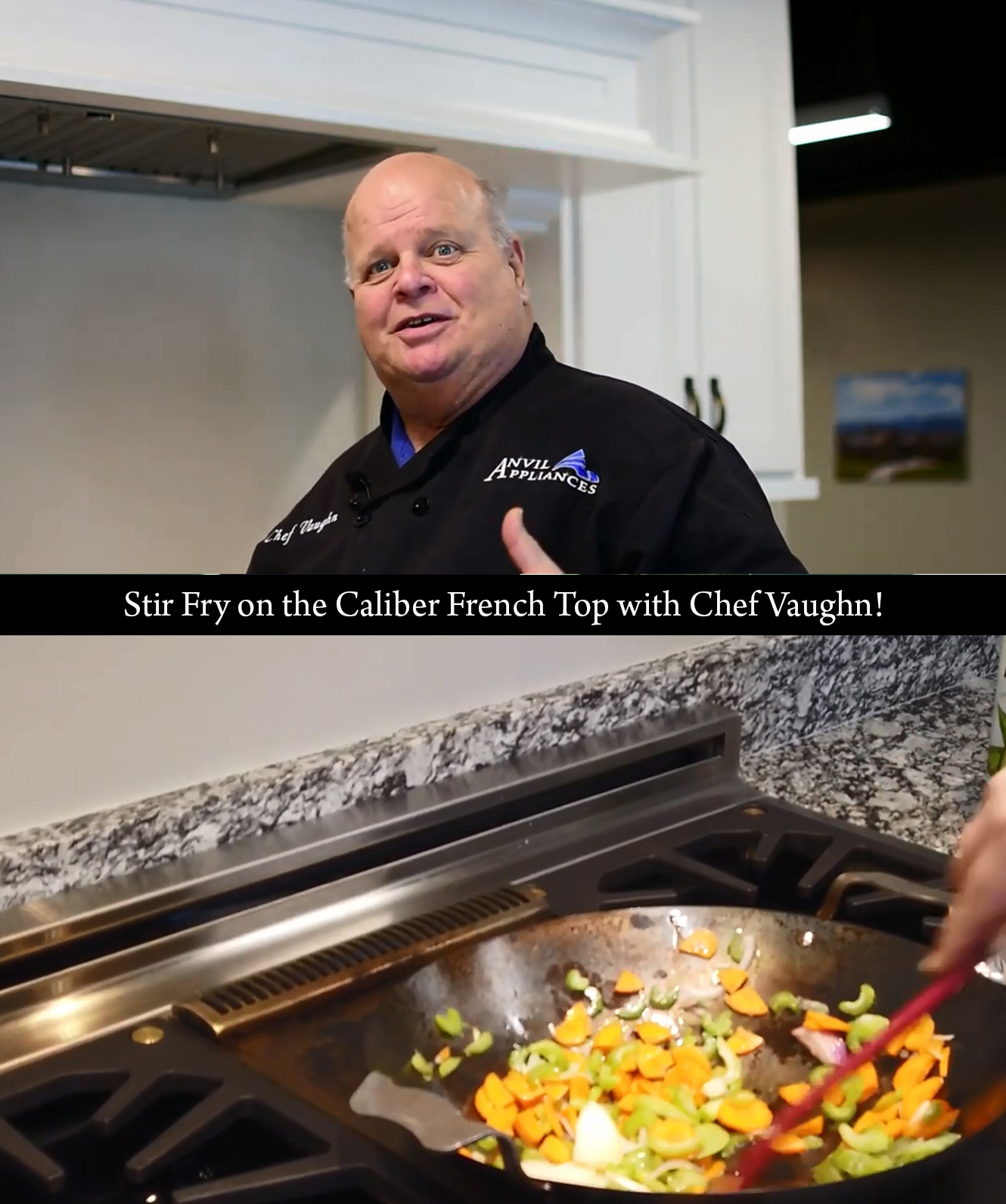 See Chef Vaughn of Anvil Appliances use the wok on the Caliber 25,000 BTU French Top. He creates a delicious chicken and vegetable stir fry. Chef Vaughn can hear the sizzle and see the steam for that perfect cook.

For the full video of Chef Vaughn’s recipe click here or below or visit his youtube channel: 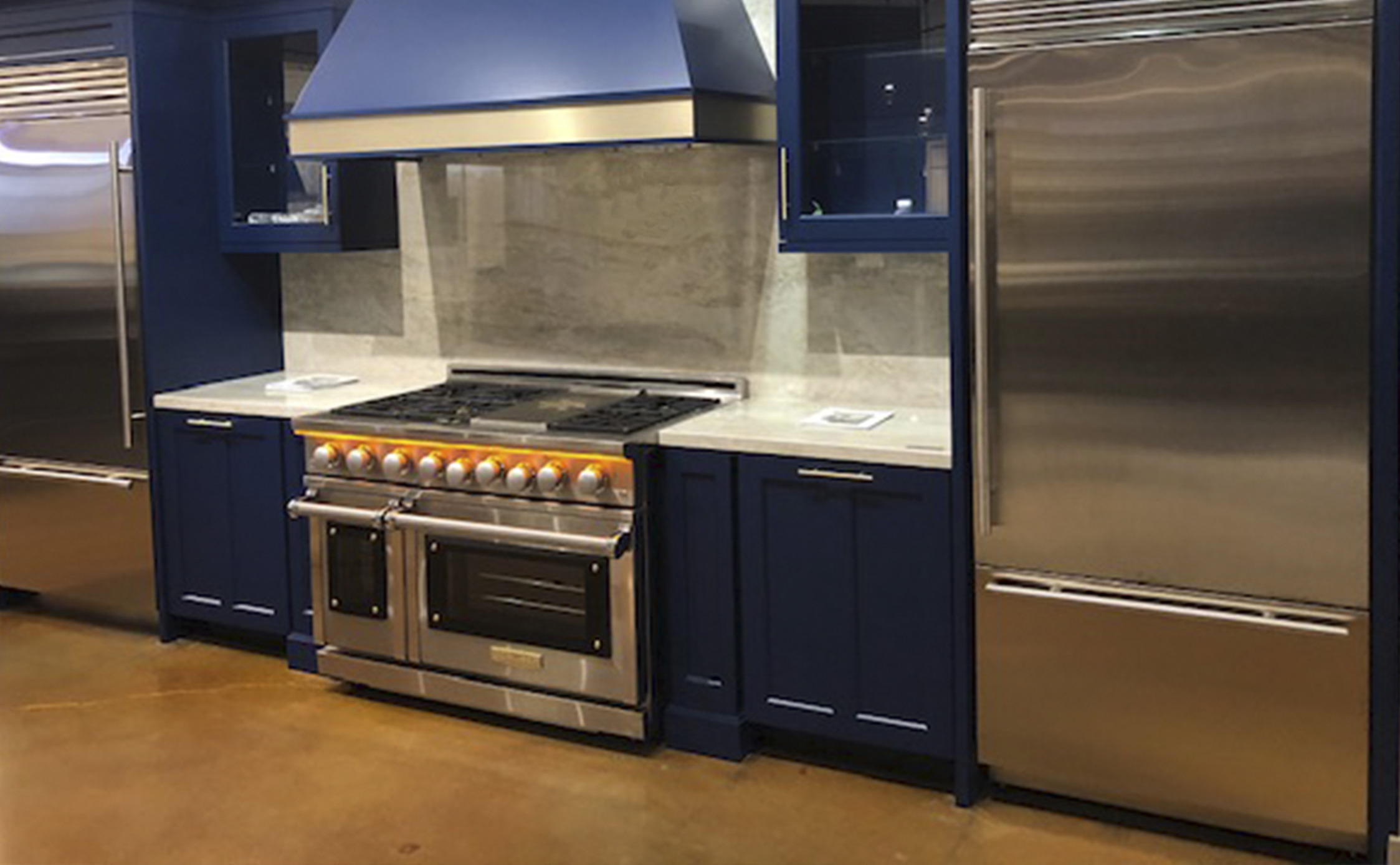 Our featured Caliber dealer this month is Midland Appliance. Midland was founded in 1984 and created from the desire to give people the highest quality selection of appliances in British Columbia. Since then, the company has maintained its local roots operating two showrooms in both Vancouver and Richmond. Striving to create a quality luxury appliance buying experience, Midland is constantly showcasing the latest in appliance trends on their showroom floors. Caliber has joined Midland through our Canadian distributor, Pacific Specialty Brands.

The featured display picture of the 48″ Caliber Indoor Professional Range: 6 Gas Burners & French Top resides at the Richmond, BC location. Designer and Home Chef, Alison Kent, was drawn to this Caliber display along with the unique details and craftsmanship of the Caliber range during the research process for her own kitchen renovation project. See why Alison choose the Caliber Indoor Pro Range for her own kitchen in this article. 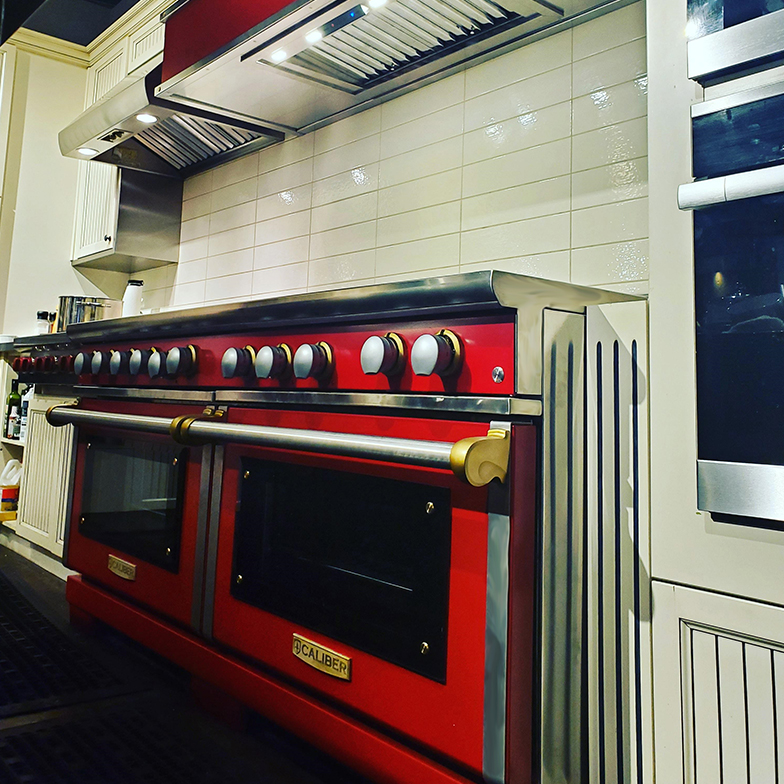 Caliber Appliances’ Featured Dealer, Jerome’s Appliance Gallery in Calgary, Canada recently installed a 72″ Caliber Indoor Professional Range with 6 Gas Burners, French Top and a Double Griddle. This display has become a hidden jewel on the showroom floor for its custom brass end caps, bezels and beautiful signal red coloring. Jerome’s was even able to customize the configuration of the rangetop.

Jerome Curran and his staff invite you to visit their contemporary and unique 7500 square foot showroom to “Experience the Difference” first hand. At Jerome’s Appliance Gallery you will find their professional sales team to be friendly and expertly trained in luxury appliances. The Rockwell by Caliber Social Grill, Crossflame Pro Grill on a cart, and Caliber Pro Kamado Grill/Smoker on a cart are also on display in Jerome’s outdoor kitchen area. For location information on Jerome’s Appliance Gallery, click here. 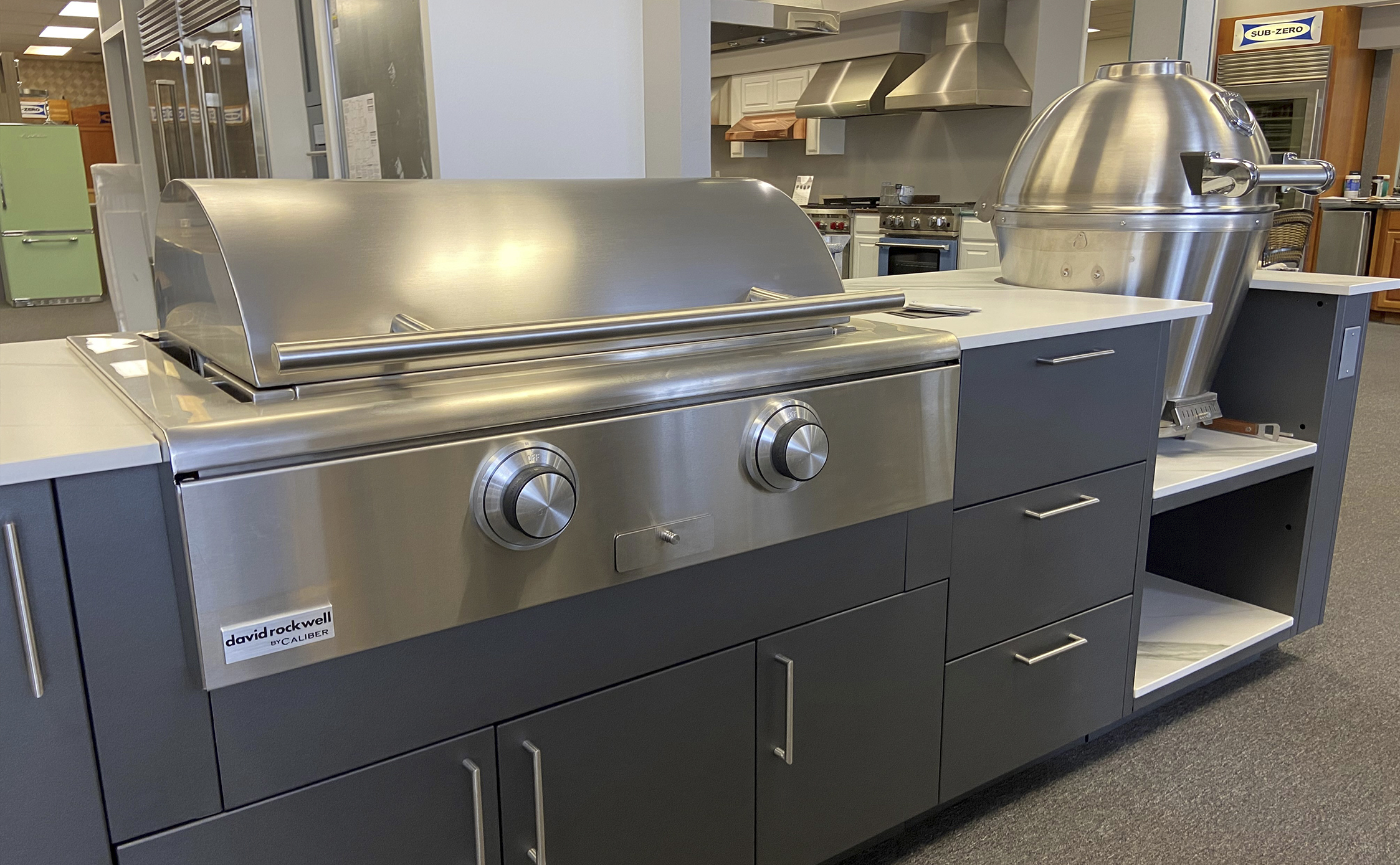 Caliber is proud to announce Vent A Hood of the Twin Cities as our featured dealer this month. They are a family-owned business in Hopkins, MN that opened in 1969. In 2005 Joe & Patty Sullivan purchased the store. They specialize in high-end kitchen and outdoor products. Recently, they updated their showroom with a new outdoor kitchen display featuring Caliber’s Pro Kamado and the Rockwell by Caliber Social Grill. The grills are featured within Urban Bonfire cabinets in the color Anthracite with standard stainless steel handles. The countertop is Dekton by Cosentino in the color Opera. It is a beautiful display that you can visit using the following contact information.

Chef Vaughn also adds soaked apple chips to the kamado to create a unique smoky flavor. For the full video, click here or on the video below. And, contact Anvil Appliances Salt Lake City Design Center location if you want to test drive a Caliber Appliance with Chef Vaughn. 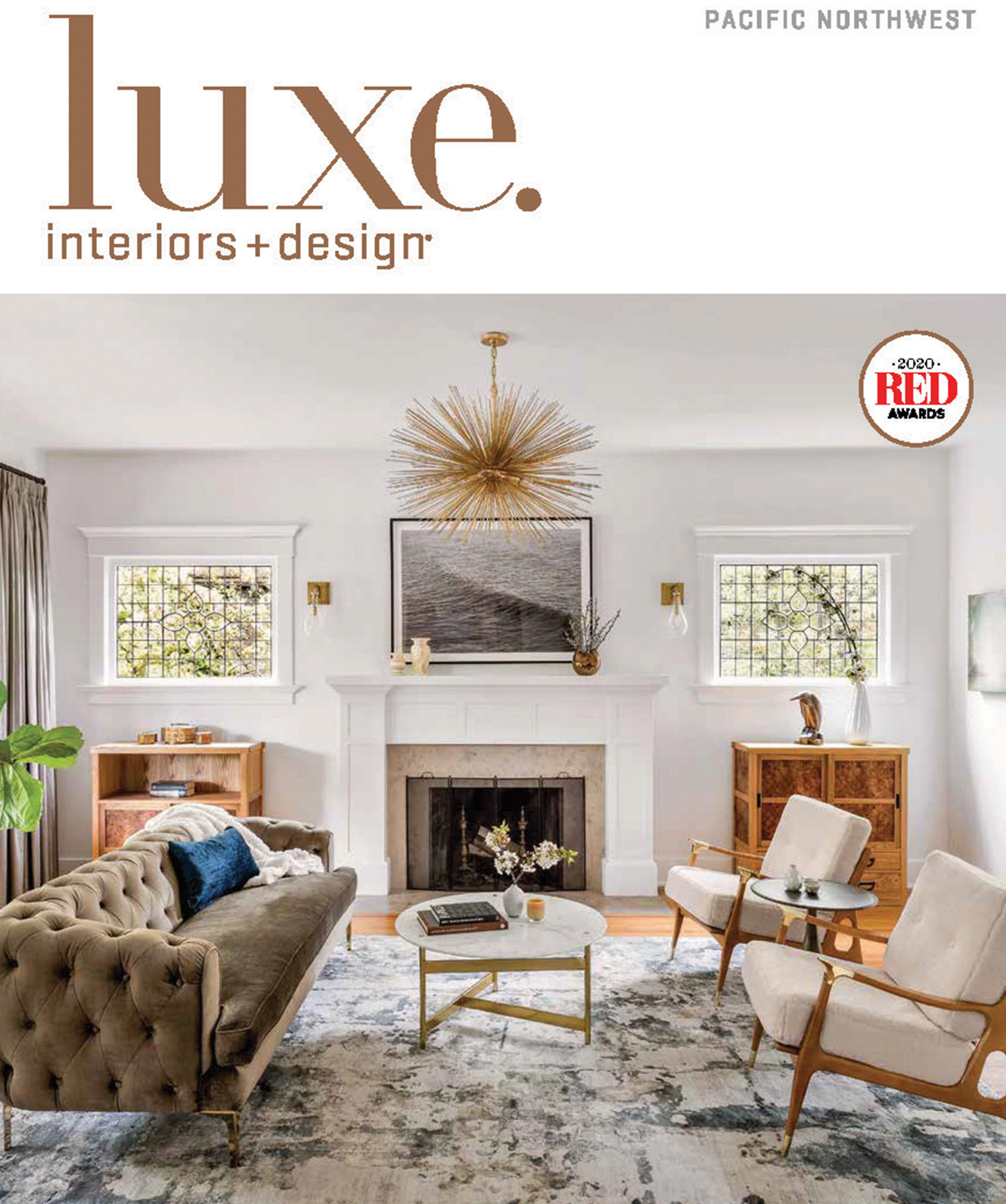 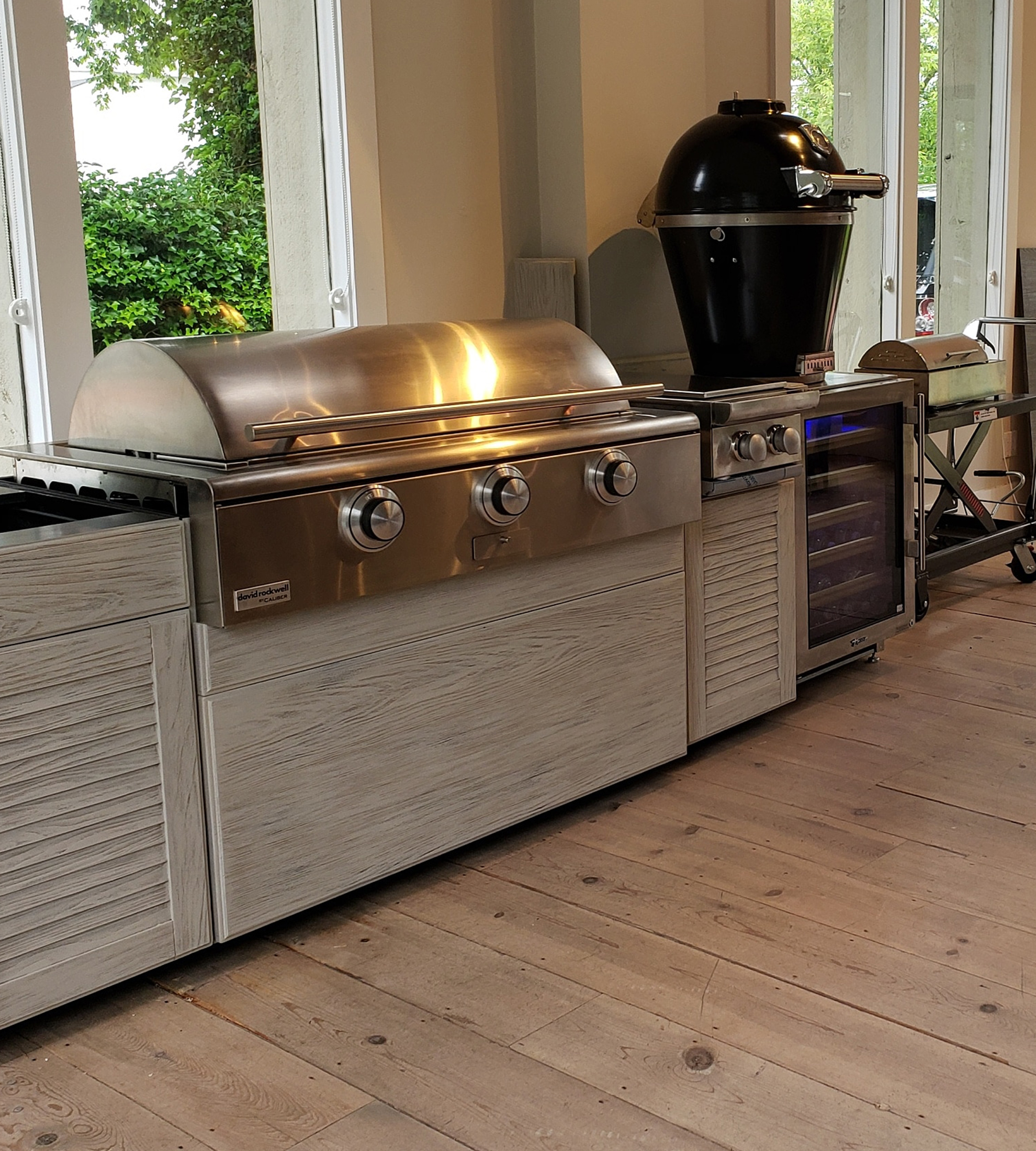 The Outdoor Kitchen Design store is Caliber’s featured dealer this month and they can manage, design and build outdoor kitchen projects back east. This includes help with the right product selection and installation.

Click here for the location of this new showroom. 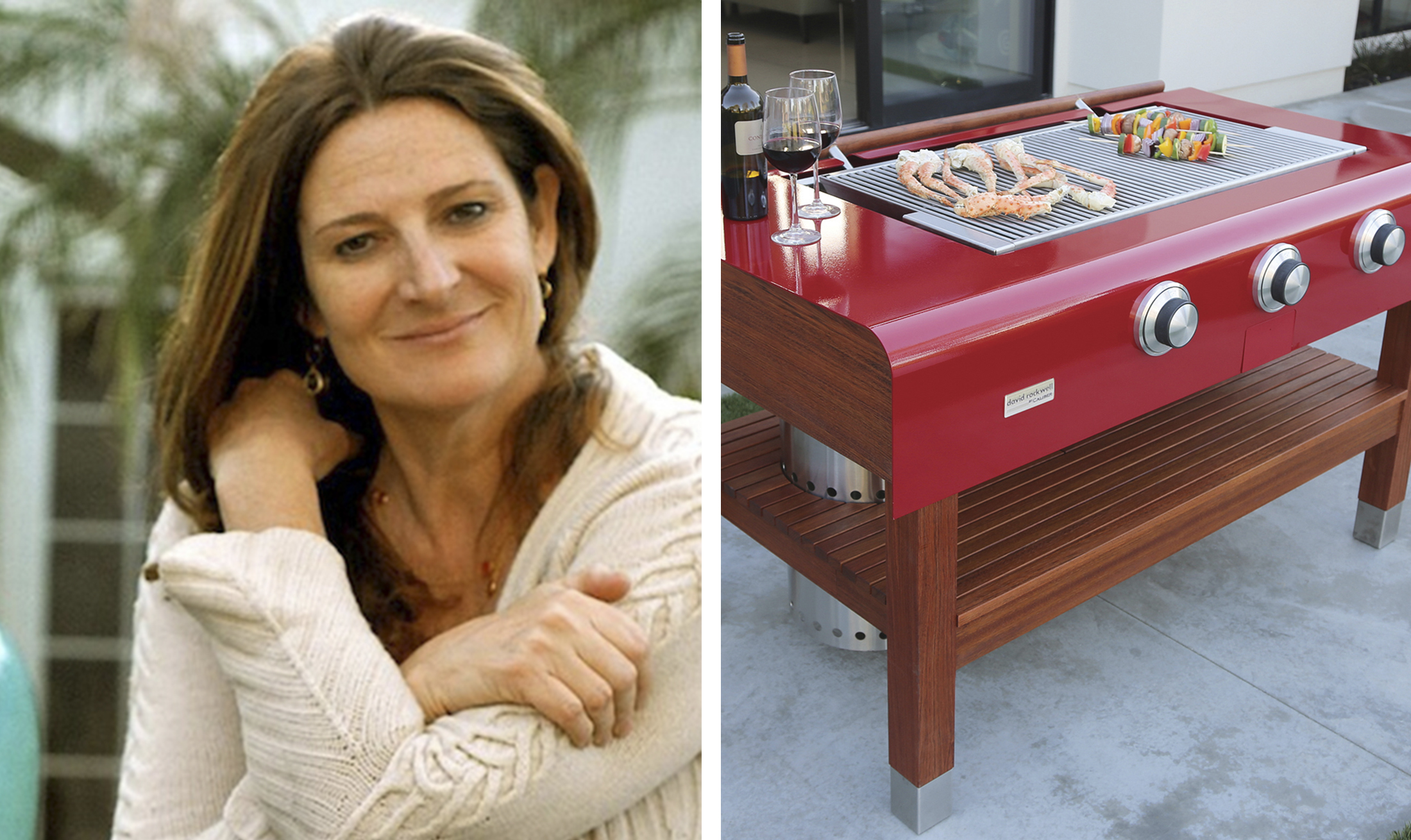 Established in 1949, Snyder Diamond proudly remains an independent, family owned and operated company located in Santa Monica, Pasadena and North Hollywood. Snyder Diamond is a premier dealer of Caliber Appliances and kicked off their summer grilling with designer and Caliber grill owner, Kathryn Ireland. Ireland fell for Caliber’s 360-degree walk-around Social Grill, a grill designed exclusively as an installation for David Rockwell of the Rockwell Group, notable for its fully retractable ‘disappearing’ lid—a feature that Ireland loves, though its bright red color is what grabbed her attention first (it also can be any custom color). “The one thing I kept of my house was its red garage door, so I saw this and thought, ‘Oh, it’s crying out to be in my backyard,’” the designer says.

With so many of us pressing pause on any vacation plans that involve air travel this summer, the whole concept of a “staycation” has taken on new meaning—with our own backyards suddenly looking like the best bet for a safe retreat. Of course, being stuck at home isn’t so bad when your space actually looks and feels like a getaway. So when Snyder Diamond had the opportunity to check out the lush oasis of Kathryn M. Ireland (see picture above) they jumped at the chance with this summer grilling kick-off video.