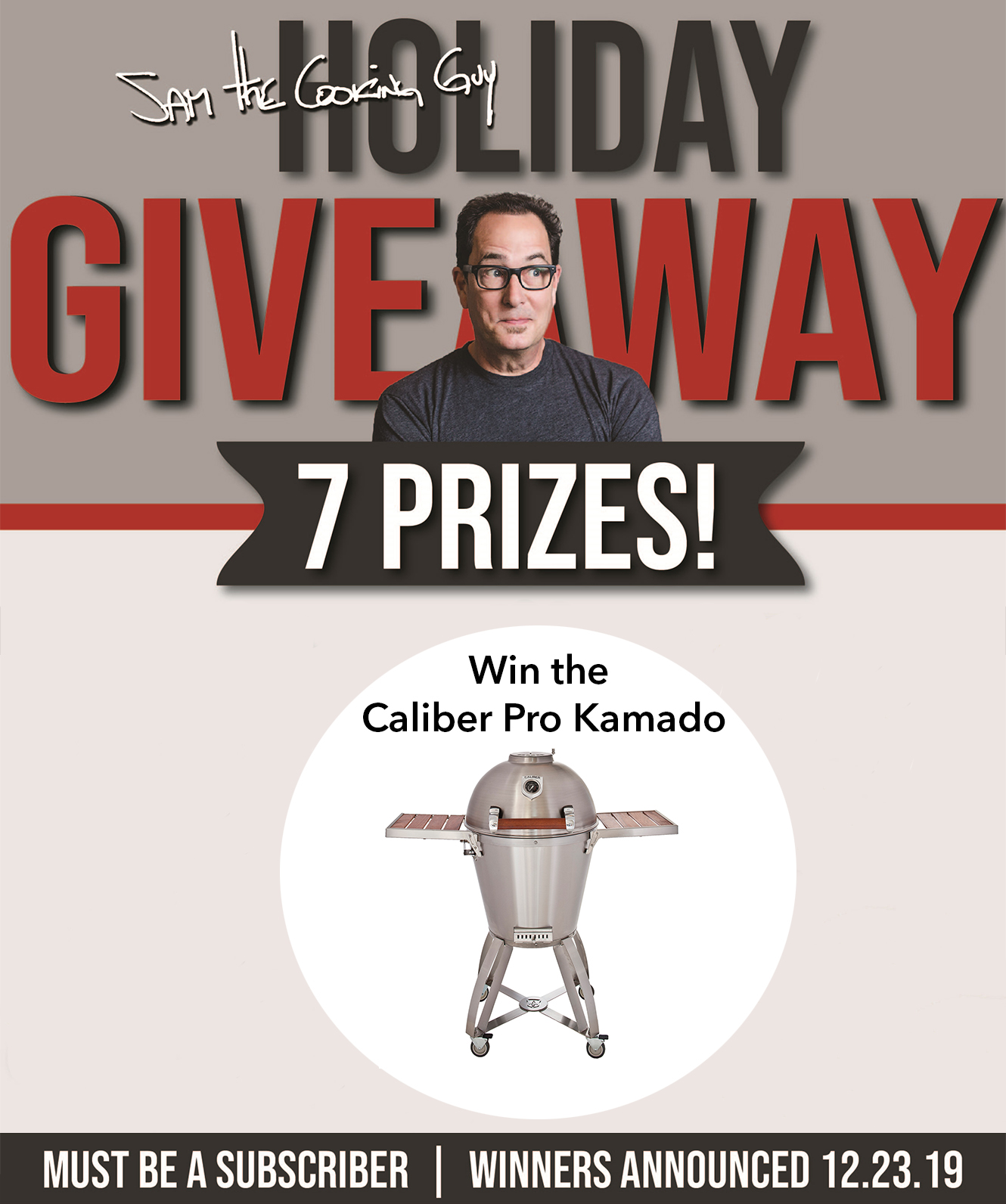 San Diego, CA (December 2019) – Caliber Appliances, makers of award-winning grilling products, proudly announces participation in Sam the Cooking Guy’s Holiday Giveaway! You can win a stainless steel Caliber Pro Kamado Charcoal Grill/Smoker, wooden shelves and cart, blaze basket, rib rack and cover as part of the giveaway. Caliber is also thrilled to have the Caliber Pro Kamado and Rockwell by Caliber Grill as part of the set in Sam’s cooking show. He’s cooked some amazing recipes on these grills that can be found here: https://caliberappliances.com/category/press/sam-the-cooking-guy/ In order to enter this giveaway you must follow the instructions in this video: https://youtu.be/ilMyY9tlqPU and enter by midnight on December 22, 2019. Winners will be announced on December 23, 2019.

ABOUT SAM THE COOKING GUY

Sam quit a biotech job in July of 2001 to try his hand as the host of a travel show.  But a month before a trip to shoot in Tokyo and Hong Kong, September 11th happened – and that changed everything.He decided to stick with TV, but switched from travel to cooking and eventually landed a twice-weekly 2-minute cooking segment on a local morning news program.  The segments caught on and grew into a 30-minute show appropriately named ‘Sam the Cooking Guy’ – an irreverent mix of humor and easy-to-replicate recipes. It’s ‘reality’ cooking – in the sense that whatever really happens when he shoots, stays in the show.  Eventually, Discovery Health came along and ‘Just Cook This! with Sam the Cooking Guy’ was born. Known for his ‘big in taste and small in effort’ philosophy, Sam has 15 Emmy awards, 3 cookbooks and a dozen visits to the Today Show, He’s also creates video content for companies like Chosen Foods, Bed Bath & Beyond & Bumble Bee Foods, And his casually understandable YouTube series continues his simple style, with 6-15 minute episodes.

Caliber Appliances is dedicated to innovative design and superior engineering down to the smallest detail.  Caliber’s focus on excellence in form and function has led to award-winning status for their gas barbecues and multi-function wood smokers and rave reviews in the market for its restaurant-like food. Even famed designer David Rockwell chose Caliber to build his newest line of grilling entertainment centers.  Caliber delivers True American Luxury in grilling with premium products that can transform an outdoor kitchen into a commercial grade Culinary Center. The Caliber line of outdoor products includes the Crossflame® Pro Grill, Caliber™ Pro Kamado Charcoal Grill and Smoker, the Rockwell by Caliber™ Social Grill and Power Pro Dual Top Burners.  The Caliber Indoor Professional Range and Rangetop series complements the outdoor suite of products.  Caliber has been recognized with “Product of the Year” awards and is the recipient of two Vesta Awards from Hearth & Home magazine along with a Special Mention Architizer Award. 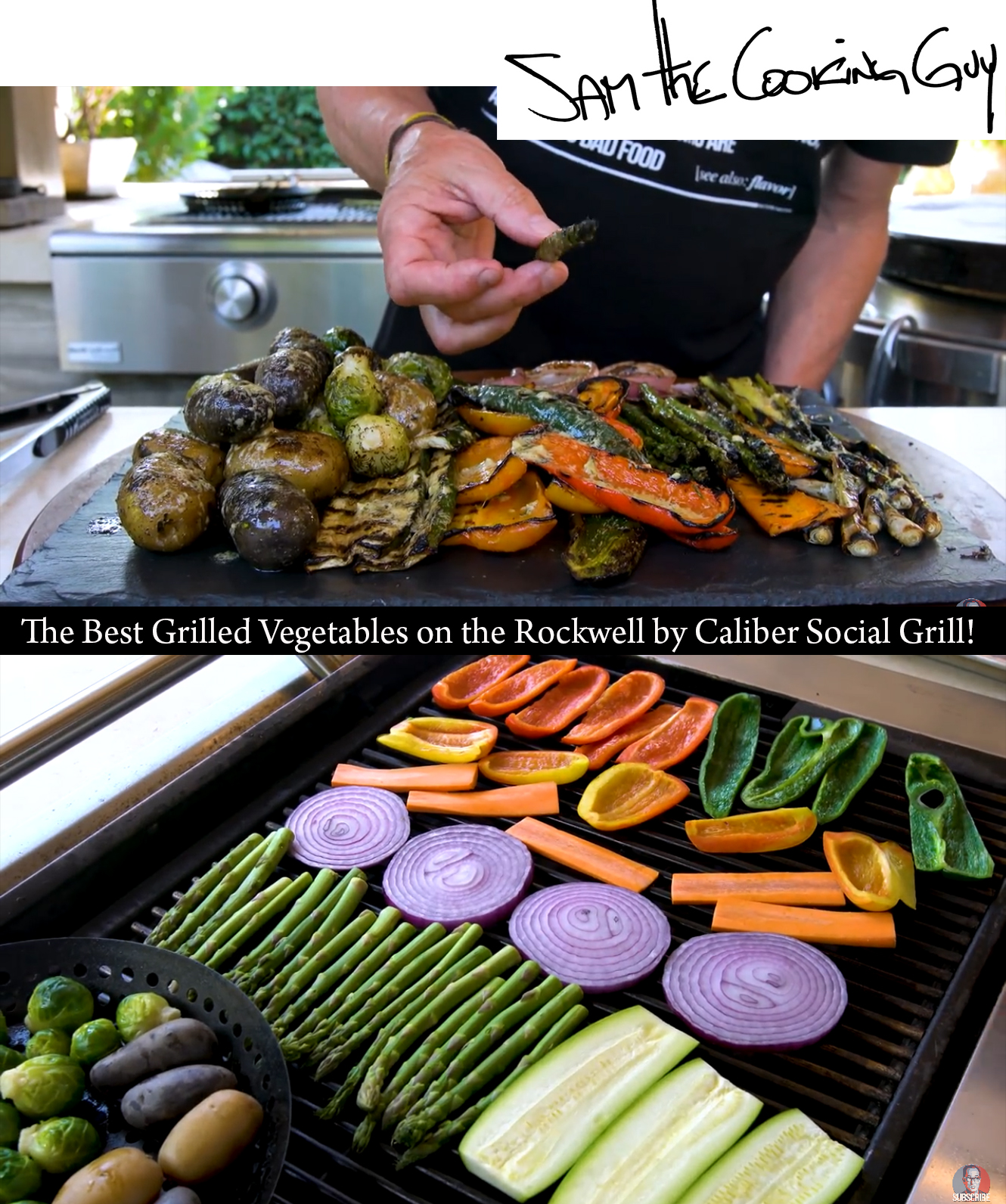 See how Sam the Cooking Guy cooks the “Best Grilled Vegetables Ever” on the Rockwell by Caliber Social Grill in this video below.

In this video Sam bastes the veggies with a delicious sauce that you’ll need to watch the video for the recipe.

Chef Sam ends with this amazing grilled veggie sandwich that also includes a delicous and easy spread on that toasted foccacio bread. Who says gilled veggies are boring? For this recipe you definitely have to watch the video. 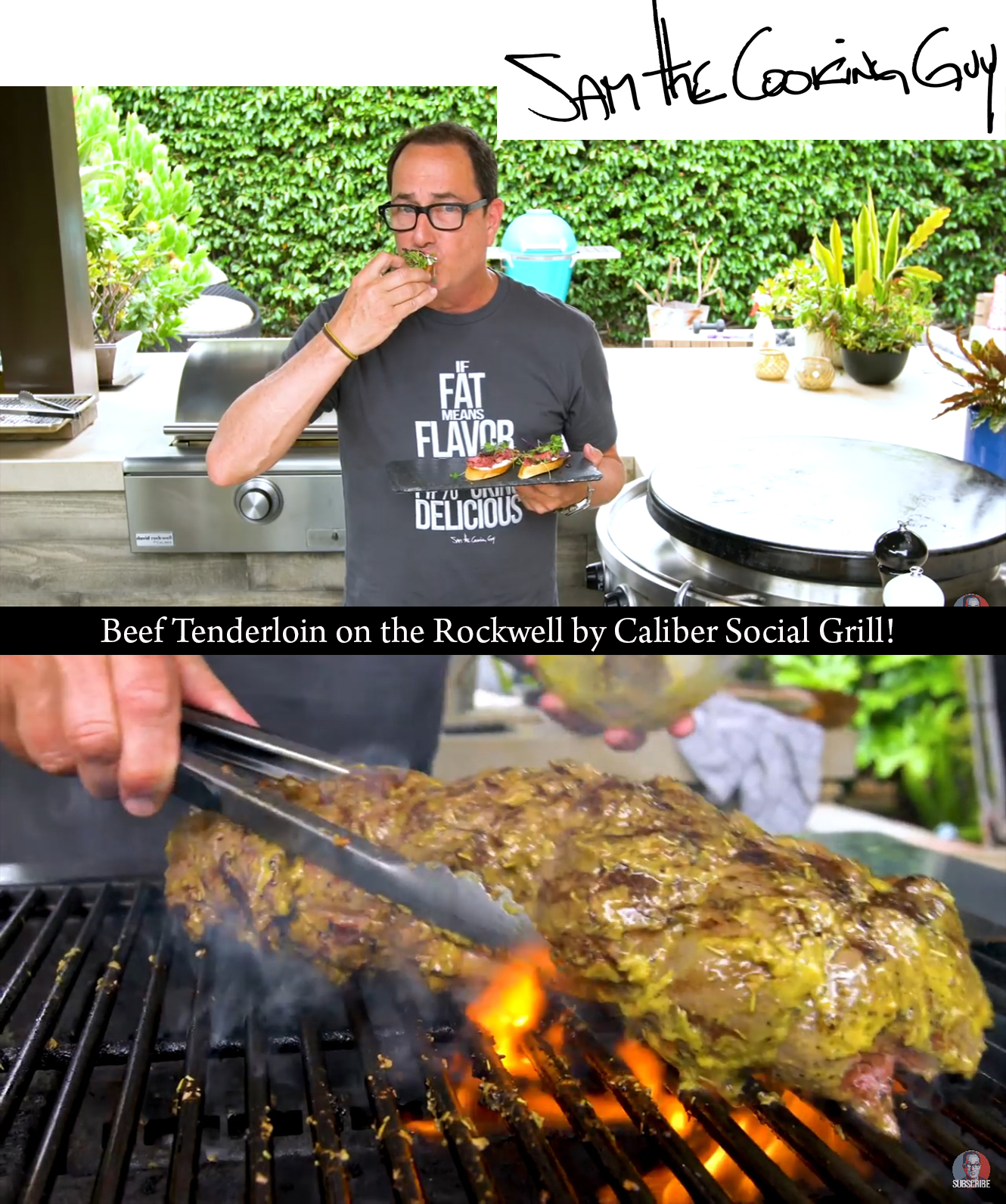 Chef Sam the Cooking Guy will show you how to cook the “Best Steak Ever” on the Rockwell by Caliber Social Grill. Sam believes the best steak starts on the grill with this melt-in-your-mouth beef tenderloin recipe below. 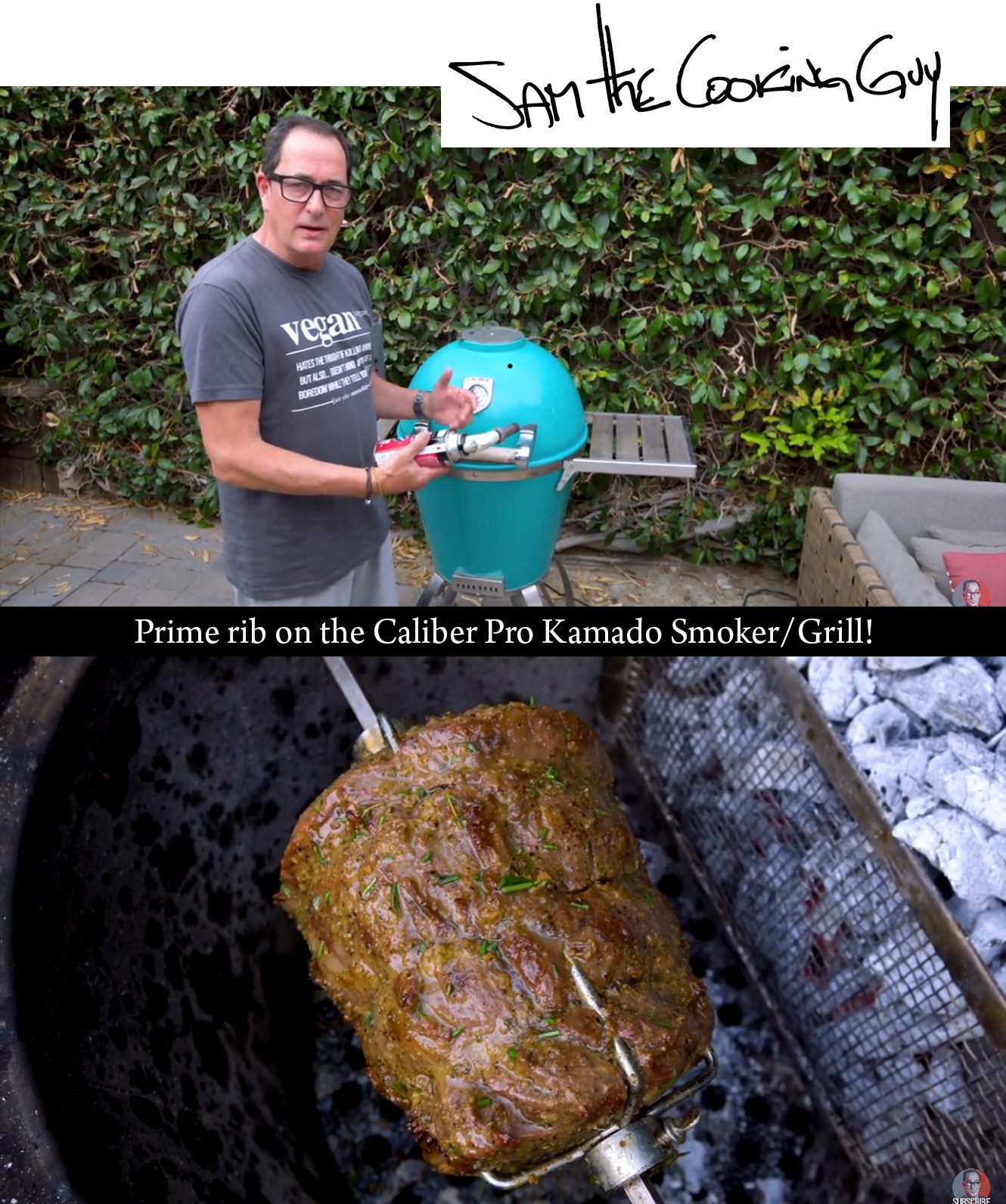 Chef Sam the Cooking Guy will show you how to cook a perfect prime rib roast in the Caliber Pro Kamado Grill/Smoker on rotisserie – it’s easier than you think! Watch this video below for the recipe.

Written by
pwsadmin
Posted in
How To, Recipes, Sam the Cooking Guy
Tagged
rotisserie chicken 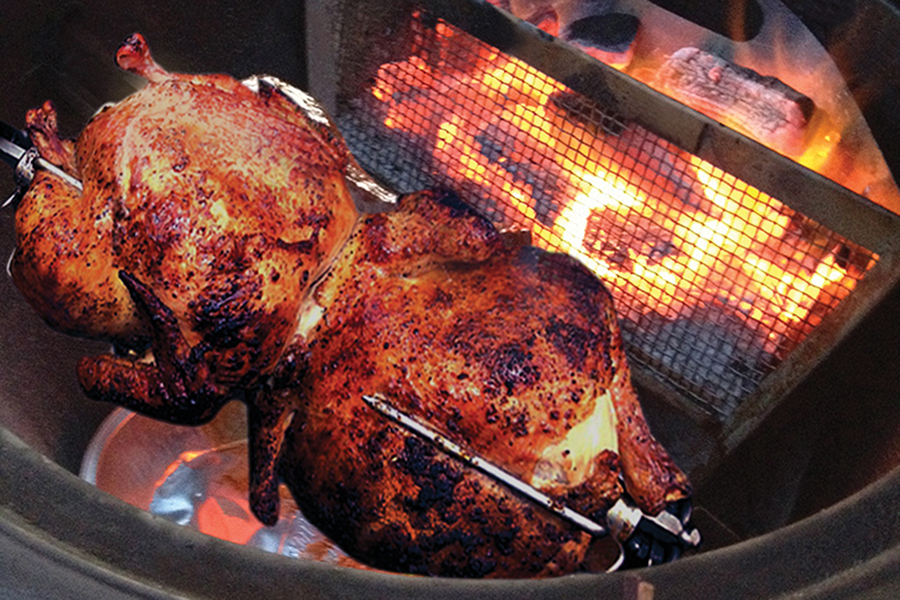 Wash and brine your chicken with your favorite dry brine and place on the rotisserie rod. Truss the chicken once it’s on the rod and use pliers to tighten the fork screws. Prepare the Caliber Pro Kamado Smoker by filling the blaze basket accessory 3/4 full of lump charcoal and a handful of apple chips at the top. Put a drip pan at the bottom of your grill to catch the juices for use as a baste after the chicken is cooked. Wear heat protective gloves when inserting the rotisserie rod and chicken. Let the rotisserie run for about an 75 to 90 minutes while basting with olive oil periodically. To check the doneness, turn rotisserie motor off and insert the thermometer into the thickest part of breast with temperature reaching 165 (+/- 5 degrees). Rotisserie chicken on the Caliber Crossflame Silver or Pro gas grill should be cooked on HI initially, and then MED once skin darkens. Cook time and doneness is similar to cooking on the Pro Kamado. Enjoy!

For the video of rotisserie chicken on your Caliber Pro Kamado visit our YouTube Channel at:

See below instructions on how to set up your rotisserie on your Caliber Pro Kamado: 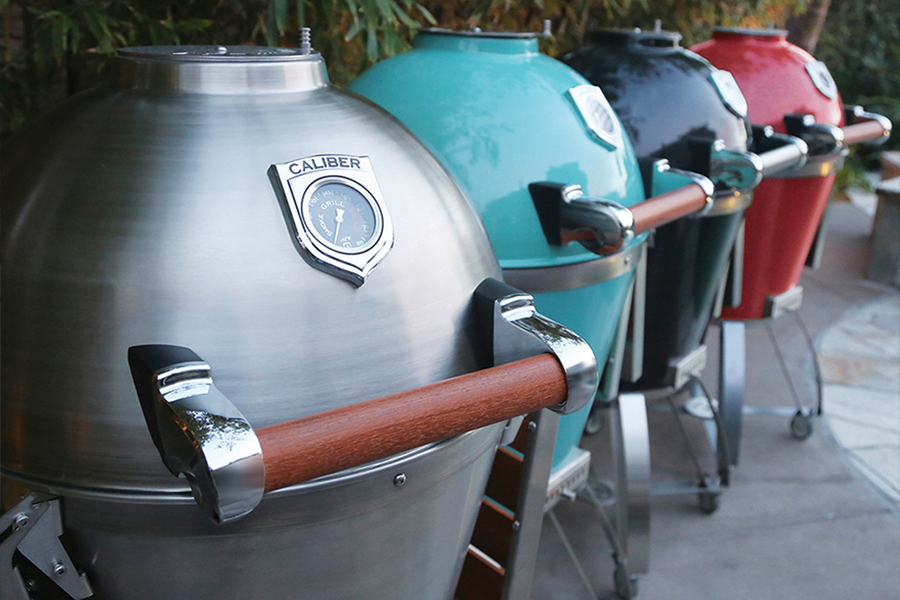 In this video below Chef Sam the Cooking Guy shows you the ins and outs of the Caliber Pro Kamado Charcoal Grill & Smoker:

In this video below Chef Tony Matassa shows you the features of the Caliber Pro Kamado Charcoal Grill & Smoker:

See below how the Caliber Pro Kamado compares to other ceramic kamado grills:

For more information on the Caliber Pro Kamado Charcoal Grill & Smoker go to this section of our website here.

For more info on how to use your Caliber Pro Kamado and Indirect Blaze Basket, click here.

For more info on how to use the rotisserie on the Caliber Pro Kamado, click here.